There was a little girl by Henry Wadsworth Longfellow 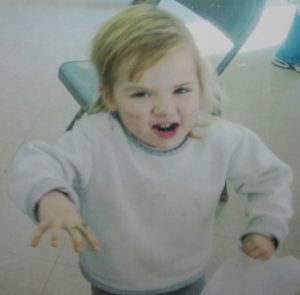 ‘s post is dedicated to a dear little girl who, several times, has cut off her curls . . . . As a young lady now, she has stopped (thank God!) and is celebrating her birthday today. The photo is when she was about three, dressed as a mouse for Halloween at church. That morning, she’d closely trimmed the right side of her hair which, I’d hoped, would be covered by her mouse-ears-hood but you can see, it was not. I also believe that to her, at that age, everything was supposed to be scary on Halloween–so she did her best. And she claims my heart.

Longfellow, according to his son, Ernest, composed this poem “while walking up and down with his second daughter, then a baby in his arms, . . . and sang to her the well-known lines.”