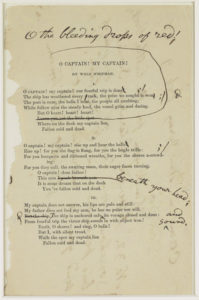 Today’s poem is part of the collection Drum-Taps and Sequel to Drum-Taps that are much of Whitman’s reflections on his time as a nurse during the American Civil War.  This one, along with When Lilacs Last in the Door-yard Bloom’d, speak specifically about Lincoln’s assassination.

If you have the chance, Whitman’s book, Drum-Taps and Sequel to Drum-Taps are available to read on gutenberg.org

As you may already know and as I mention in the audio, this poem played an important part in the 1989 movie, Dead Poets Society, starring Robin Williams. When Williams character, John Keating, is fired from his position as English teacher, his students make a show of their support by standing on their desks and declaring, “O Captain, My Captain!”

Enjoy the reading and more of Whitman’s poems this month. Might want to dig out that DVD of Dead Poets Society, too, for a rewatch!