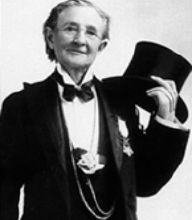 I love the paths my work takes me down–the SIDE paths–I’ve been to Gettysburg after narrating Jocelyn Green’s second Heroines Behind the Lines novel, Widow of Gettysburg; and now I’ve been studying the lives and accomplishments of other women pioneers in the medical field as well as other areas of women’s lives, such as Dress Reform!

Listen here to excerpts from Dr. Mary Walker’s essay on the subject. Bear in mind, she was raised by free-thinking parents who were also opposed to the tight corseting and layers of women’s dress in the 18th century. Mary wore pants under her dress and eventually, changed her entire wardrobe to be that of a man’s–even wearing a top hat to complete the look. (She was arrested, more than once, for doing so.) She was more comfortable, could move easily, and advocated for the shift to more comfortable and “hygienic” clothing for women.

In Ms. Green’s first novel of her Civil War series, her characters have this very thing to deal with as they become nurses and abandon their hoops to better serve their patients.

Tags: American Civil War, Dr. Mary Walker, Heroines Behind the Lines, Jocelyn Green, Mary Edwards Walker, narration, voice over, Wedded to War
PREVIOUS
NEXT
No comments yet, be the first one who will leave the comment.